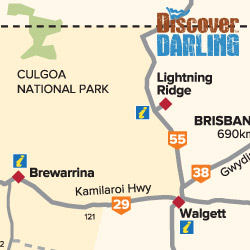 Walgett likes to describe itself as ‘The Gateway to the Opal Fields’ because it is an ideal place to stay before heading off to the famous opal mining settlement of Lightning Ridge (76 km away) and the smaller opal fields at Grawin, Glengarry and the Sheepyard, all of which are located north-west of Walgett.

The town is located by the Namoi River near its junction with the Barwon River in northern NSW, 696 km north-west of Sydney. Walgett is also just a really nice place to stay where the people are friendly and the sense of ‘Outback’ is cleverly merged with the facilities and amenities of a larger town.

The Aboriginal meaning of “Walgett” is “meeting of two waters” as the town is located by the junction of the Namoi and Barwon Rivers. Walgett is 696 km north-west of Sydney and is the centre for the surrounding rural area which is based around the production of wool, beef cattle, fat lambs, sheep studs, chick peas and its biggest industry, wheat.

In fact Walgett has the largest temporary wheat storage facility in the southern hemisphere. Its attractive riverside location also makes it an ideal spot for fishing: Murray cod and Yellowbelly being the predominant catches.

The original Walgett Bore Baths were located in Dewhurst Street and opened on the 8th of December 1933. They were built of wood and were considered a modern structure for their time. The building was beautiful and ornate. The bore baths proved extremely popular from the start, particularly in the evening. Between the 8th and 17th December, for example, 1047 people passed through the turnstile. The current Bore Baths were opened in 1988. They were built as part of the Bicentenary celebrations. Due to the corrosion of the shed from the minerals in the water the shed has had to be removed and now Walgett has a small bore bath area that is used by many people. The Walgett Bore Baths are open Monday to Friday 8am until 4pm (seasonally March – October). There are no entry charges. The warm artesian waters are rich in potassium salts, which are therapeutic for tired and aching muscles.

If you are interested in bird watching then a trip out to Narran Lake, 96 km west of the town, is well worth the effort. It is one of Australia’s largest natural inland lakes.

One of the great driving adventures of NSW is the Darling River Run and Walgett is the perfect start or finish to this great adventure as it is slightly upstream from the Darling River near the junction of the Barwon and Namoi rivers.

Head west to Brewarrina (133km) to witness some of the most significant Aboriginal heritage in Australia.