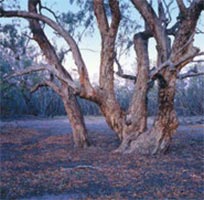 The Culgoa National Park, which shares its northern border with the Culgoa Floodplain National Park in Queensland, is relatively small park but is no less important in its location in the Murray Darling basin in addition to Aboriginal and European culture. More

Gundabooka National Park is located a short drive from Bourke and the Darling River boasts some magnificent examples of Aboriginal Rock Art in addition to three magnificent walks to access different sections of Mt Gundabooka. More 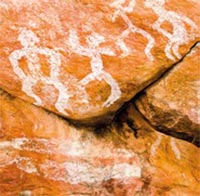 Mt Grenfell Historic site is a spiritually moving area as it provides many examples of magnificent rock paintings. The semi-permanent waterhole and many rockshelfs that provided shelter and ceremonial places that now exhibits some wonderful linear and figure designs depicting humans and assorted animals that are significant to the area and Aboriginal culture. More

One of the newer parks, The Paroo-Darling National Park is split into two regions covering the Paroo River and Perry Lake in the north and Wilga Station on the Darling River in the south of the Park near Wilcannia. More

Mutawintji National Park, which includes Mutawintji Historic Site, is an extremely special place for the living culture and spirituality of Indigenous Australians. The historic site has an extensive history as an Aboriginal ceremonial site relevant to many indigenous groups from the immediate and surrounding country. More

Located on the Darling River near Menindee, Kinchega National Park covers a large area incorporating several of the Menindee Lakes (originally named the Laidley Ponds) and some of the best vantage points for fishing and camping along the banks of the Darling River. More

Probably the best known, Mungo National Park and its iconic ‘Walls of China’ is a ‘must see’ park not only for the shear beauty of the Lunette and the dunes which make up the ‘Walls’ but for the amazing and spiritually moving anthropological significance of the area which has evidence of continual Indigenous habitation extending over 40,000 years. More