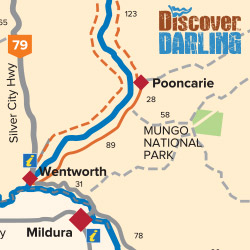 Originally gazetted as Pooncaira in 1863, the area was first ‘established’ by Europeans in the 1840’s as settlers took up illegal livestock runs on crown land. By the 1860’s the federal government, in an attempt to gain control of the area, formalised these illegal (and unfenced) claims.

The famous explorers Burke and Wills reached the Darling River at nearby Tarcoola Station and made camp at what is now Bilbarka Park in September 1860 on the way to their ill-fated expedition north west to the Gulf.

More settlers followed and the town established itself as a service hub for outlying stations and more importantly, at the time, a port for the paddle steamer trade that was pushing up the Darling River.

Visit the Old Wharf Site today in the banks of the Darling, via McKinlay Street into Darling Street.

The highlight on the social calendar is the Pooncarie Cup held each October.

One of the best Outback attraction in NSW is probably Mungo National Park and Pooncarie is nearest upstream town to this magnificent natural wonder and culturally (indigenous) significant sites.